Everything about Simulated Game Shooting in the UK

Simulated game shooting has become quite popular in the UK with amateurs as well as old-hands using them as a sort of tune-up for the actual game shooting season. As apparent from the name, simulated shooting involves firing at clay pigeons instead of real birds. And even though there is a notable difference between the two, shooting clay pigeons is indeed the next best thing to shooting game. Here we cover the basics of game shooting in the UK and how it differs from traditional game shooting. We touch upon timings, guns, attire and even the cost to help you get a good idea of what this sport involves. 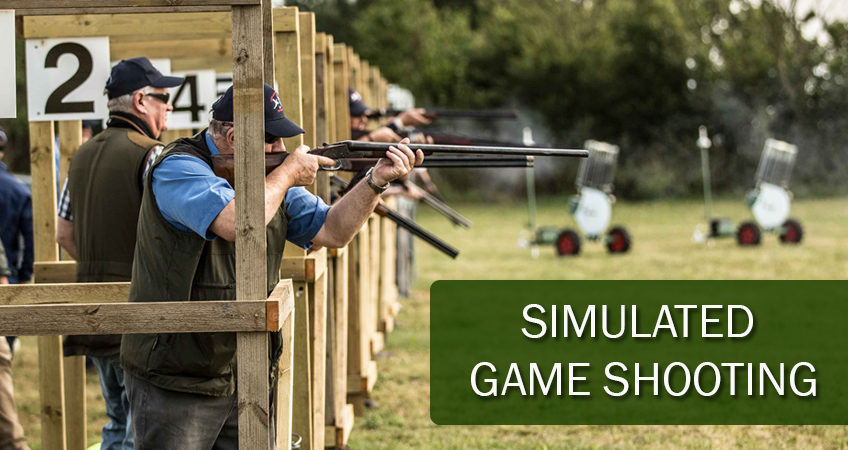 Unlike pheasant and grouse shooting, simulated game shooting has a lot of leeway when it comes to timings. After all, clay traps are far easier to predict than birds, or even beaters! The actual timing depends on the provider you opt for. Simulated shooting days are typically held in spring and summer months. That means you do not have to worry about wrapping things up before it gets too dark.

Generally speaking though, the schedule for simulated shooting days mirrors that of normal game days. All participants meet for a quick coffee and bacon around 9-9.30 am before heading for the drive.

Traditional game shooters might be a tad surprised to find that, in simulated game shooting, guns are pegged just like with normal game days. There is a slight difference though; the pegs in simulated shooting are placed closer to each other.

Clays are aplenty in simulated game shooting, and in a departure from traditional game shooting, poaching isn’t exactly a taboo here. You can aim for clays flying over shooters standing four pegs down from you and no one is likely to bat an eyelid. However, it is best to shoot down the clays propping up in your window and have a good time.

Apart from the shooting technique, there are a lot of other differences between simulated game and actual drive game shooting. For instance, most teams on pheasant days have eight guns. However, with simulated game shooting, it is not unusual for that figure to be double, or even higher. So, it’s likely for you to share a peg with another shooter, with both taking turns at shooting the clays.

Providers also usually schedule a break midway during the drive just to swap around. Imagine doing this on a conventional game day where the unpredictability of partridges and pheasants means that even a moment’s break can rob you of good shooting opportunities. Speaking of which, shooting opportunities are never a problem with simulated game shooting. If anything, many shooters make the mistake of going overboard and wind up with an aching shoulder. You can avoid that by being selective in your shooting and aiming for the truly challenging stuff. That way, you thoroughly enjoy the day and feel fresh enough at the end.

Although real game shooters might have an issue with clay shooting, the flexibility of the latter is the single biggest reason why it’s so popular these days. For instance, most providers schedule a break for elevenses a couple of hours before lunch. But since it’s clay shooting, and there are mobile multi-trap devices these days, this schedule is yours for tailoring. In fact, it’s not unusual for people to schedule a simulated game shooting session late in the evening after work, especially in the summer months of June and July.

To liven things up (since only dead things are being shot here), simulated game shooting providers often arrange a sort of competition where your team is split into smaller ones to shoot a flush. As the day winds down, do remember to tip the trappers for their efforts. Sure, you don’t need to match what you would normally pay a game day headkeeper but £20-30 from each of your team members should be good enough.

Most people prefer to wear their normal game day clothes to make it as close to the real thing as possible. And if your simulated game shooting day is similar to normal game days in length, we’d recommend that you stick to the usual shooting clothes as well, like shirts, ties, waistcoats and breeks. This could get a bit uncomfortable in the summers but before you reach for those shorts, do check with the provider beforehand.

The dressing at game days is governed more by tradition rather than out and out practicality. So, although you can pair your shirt and waistcoat with jeans, don’t go for it unless you are sure. Most of your teammates are likely to turn out fully dressed so it’s better you do the same. However, and the flexible nature of simulated game shooting comes up here again, you can mutually agree with your teammates to do something more informal.

Don’t forget to include a pair of glasses and hats to protect your eyes and head from the thousands of clay fragments that fly around on simulated game shooting days. Unlike the choice of attire, this is one risk you better not take.

The choice of gun is dictated by the fact that you shoot a lot more in simulated shooting events than actual game days. This makes an over-under your best bet since a side-by-side’s barrels get really hot when you up the ante. Also, remember that the discomfort because of the heat is only partially mitigated by barrel protectors and gloves. And if it’s a hot summer day, a side-by-side is really going to make things uncomfortable for you. But if you are looking to attend a simulated game shooting day with the intent of brushing up your shooting before the game season begins, it’s best to stick with the gun you normally use for shooting game.

So, if a side-by-side is what you normally rely on, consider using a light load cartridge during simulated game shooting. For instance, anywhere between 21 to 24 gm should be fine. The same holds for shot sizes too whereby 7s and 8s provide an adequate and enjoyable clay shooting experience.

The cost is really the best thing about simulated game shooting. Most providers typically work out pricing across different packages and what you pay depends upon the package you choose. That said, you can expect entry-level packages for clay pigeon shooting in Essex to be priced at around £200 per head. That cost also usually includes catering, which makes it a wonderful bargain especially if you are a large group.